The betting odds suggest the ALP is facing a massive defeat on Saturday. But even worse for Labor, their expected seat count is still deteriorating. 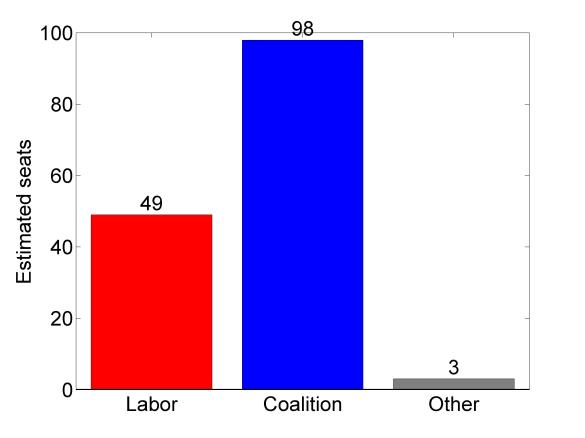 Our latest analysis in the AFR (a link will be up shortly) was conducted earlier in the week, where our analysis showed the betting markets predicting Labor would win 51 seats. Underdogs often regain a little ground leading into the final few days of the election campaign, so we thought that number might increase before election day. In fact, as of September 5, the markets now expect Labor to win more like 49 seats.

Barring an act of God, the overall election outcome looks like a foregone conclusion. Both our independent and maximum covariance models give Labor literally zero probability of victory. This is astonishing, since the maximum covariance model had been giving Labor a small but non-zero chance of winning up until very recently. The reason for this change appears to be many of the probabilities moving towards a clear victor in some of the seats that were relatively uncertain previously. As the seat probabilities move closer to 1 or 0, the choice of covariance structure has a smaller impact on the predicted result.

Leng and I will be posting our final predictions shortly. Putting aside any political views on a big Coalition victory, an easily predictable election is not a good test of our methodology! So we’ll be making predictions about individual seat results, and possibly a few scenarios, too. Stay tuned.