One big thing we’ve tried to stress on this blog is the role of uncertainty in making predictions. This post is about the uncertainty around our final seat count predictions. With our Monte Carlo simulations, we simulate 100,000 elections and the predictions are the average number of seats each party will win. But as we’ve shown before, there is a distribution of outcomes. The shape of this distribution depends on the covariance structure between seats. We don’t know what this is, so we run two models representing two extreme cases: an independent seats model and a maximum covariance model. Here is the distribution when we assume independence between seats:

The distribution under the maximum covariance model is a bit more funky looking. It’s not a classical bell shape, with the extremes having the highest probability. The reason for this was discussed in a previous blog post. Unsurprisingly, the variance of this distribution is greater than under the independence model. 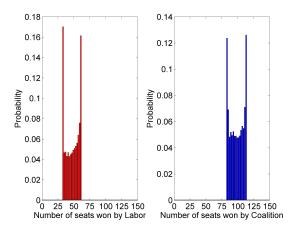 The 95% credible interval for the maximum covariance model

With this maximum covariance model, the credible intervals are wider.

Note that there is zero probability of a Labor victory under both models.

In the last post, we showed some early probability distributions that model the number of seats each party would win, and the associated probabilities. Probability distributions are perhaps not polite dinner party conversation topics (K and I have made this mistake many a time) but they are hugely important. Its a neat way to represent the degree of uncertainty about the outcome of certain events. The only thing we know for sure re how many seats the ALP will win:

I thought it might be relevant to point a few things out about the probability distribution we showed in the previous blog.

Only bell we could find

We hope to dive into more analysis of the politics in future blog posts instead of making you go through our version of stats 101!